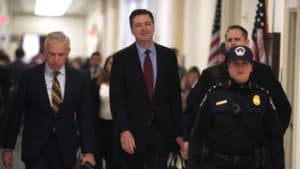 “Republicans are poised to grill former FBI Director James Comey on Friday in what could be the final act in a dramatic effort to probe allegations of bias at the Justice Department before Democrats take over the House,” writes DAY OF RECKONING: Comey Arrives at Capitol Hill, Will Testify Over Botched Hillary Probe appeared first on Sean Hannity.