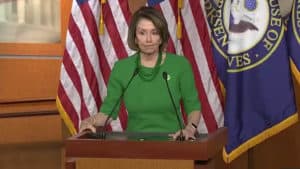 Potential Speaker of the House Nancy Pelosi flat-out rejected the proposal to fund President Trump’s signature border wall in exchange for a permanent DACA solution Thursday; saying the two issues should not be linked.

Pelosi was speaking with reporters during her weekly press briefing when she was asked if she would consider a joint solution to both major immigration hurdles; saying “they’re two different subjects.”