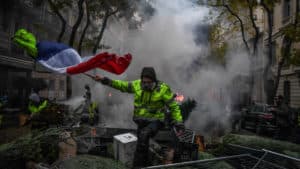 The French government will deploy 65,000 “security forces” this weekend to clampdown on widening anti-Macron protests sweeping the nation; with authorities warning of “major violence” across the country.

“France will deploy more than 65,000 security forces amid fears of new rioting at protests Saturday in Paris and around the nation, despite President Emmanuel Macron’s surrender over a fuel tax hike that unleashed weeks of unrest,” writes the Associated Press.