RUSH: Yes, my friends, Alexandria Ocasio-Cortez has rebuffed all of the fact-checkers out there. She came out, as you might remember, and compared climate change to World War II. (summarized) "We only have 12 years to stop Hitler! We only have 12 years to stop the Nazis from taking over the world!" In this case, climate change is Hitler (aside from Trump), and the Nazis are all of the things that we are doing to destroy the planet. Twelove years. We had 12 years. 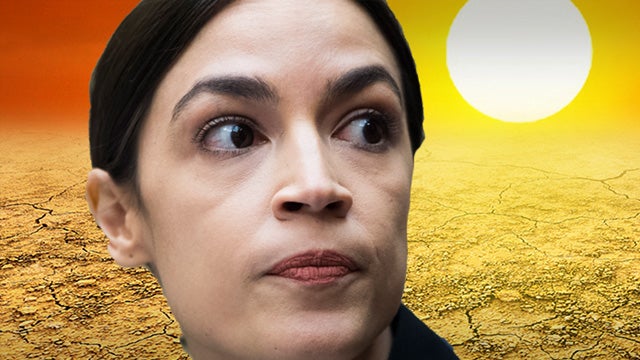 Well, the fact-checkers got in gear. (Not the liberal fact-checkers. The Drive-By Media dutifully reported it or dutifully was sympathetic to it.) So some people started fact-checking this and Alexandria Ocasio-Cortez was kind of caught short. She didn't expect that. Cortez is used to saying things and having friendly media bow down and simply report it -- but, more importantly, not challenge her. Well, this got her challenged because even people who believe full-fledged in man-made global warming don't think it's gonna happen that soon.

They think it's gonna happen, but not 12 years. Many of them still think it's gonna happen after they die. "Democratic New York Rep. Alexandria Ocasio-Cortez complained Sunday that GOP fact-checkers were taking her 'dry humor' literally. 'This is a technique of the GOP, to take dry humor + sarcasm literally and "fact check" it,' she tweeted. 'Like the "world ending in 12 years" thing, you’d have to have the social intelligence of a sea sponge to think it’s literal. But the GOP is basically Dwight from The Office so who knows.'

"And when Ocasio-Cortez first made the claim, she certainly appeared to be playing up the absurdity of the statement for effect. But those responsible for the 2018 UN report on climate change — from which Ocasio-Cortez drew her '12 years left' conclusion — did not consider their work to be an attempt at 'dry humor,'" and that's where she got it! It's our old buddies at the U.N. making this prediction. Now, I think Cortez has it exactly backwards. It's not us that don't get satire and parody. We do satire and parody. We own satire and parody here at the EIB Network.

Remember the entire city of Washington went on a three-year witch hunt based on a joke Donald Trump told. He was in Miami and he said, "Hey, Russia, maybe you could find the missing 30,000 Hillary emails. Hey, our media are the looking for them. If you can find them, I'm sure they'd love to have them." That's even in the Mueller report as an example of Trump perhaps obstructing justice. That's in the Mueller report as something that Mueller said he considered when determining whether or not to say Trump colluded with Russia.

So don't tell me about people that don't get humor. Don't talk to me about people that don't understand dry humor and sarcasm. We get it, AOC. When things are funny, we get it. But you wouldn't know funny if it bit you on your pretty little nose. This is the bottom line. These people are the ones that do not have a sense of humor. Look at all the late-night comedy shows that aren't comedy anymore. Look at all the shows! Late-night comedy is hate applause lines.

"The tweet pinned to the top of Ocasio-Cortez’s Twitter profile ... again cites the 12-year deadline along with a video showing how the world could progress if people would only heed such warnings and take them seriously," and yet she claims that it was just dry humor and people don't get it. She didn't really mean it. Well, she did. She meant it to be taken seriously. She meant it to be received exactly as it was. But they be the question to ask is:

"Okay. If her little thing could be blown up this quickly, 12 years -- we've only got 12 years -- what about 20? Do we have 20 years? Do we have 25? Somebody could be 30. Do we have 30 years? At what point do we pass the point of no return?" They want you to think that we already have. The fact that this backfired is probably... One of the best things about this backfiring is that it indicates, as far as public opinion is concerned, that Cortez bombed big time in persuading people of the urgency and seriousness of this, which is always good to know.